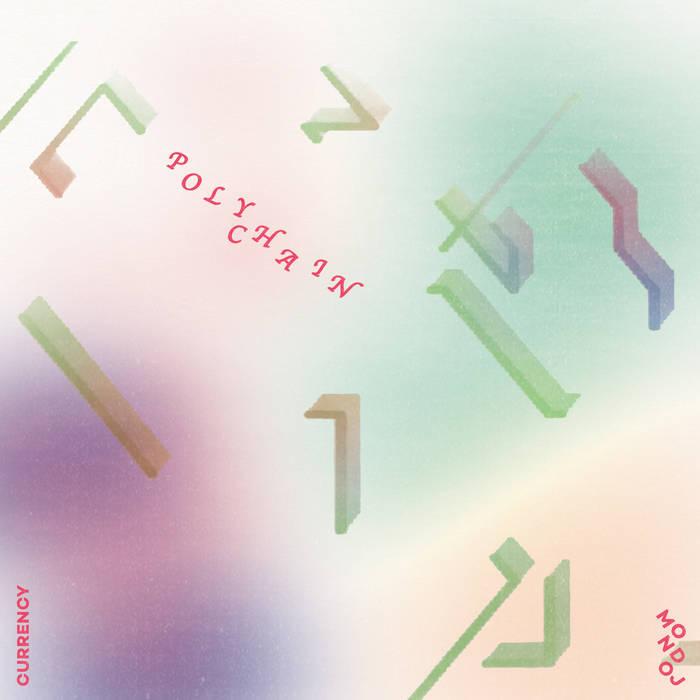 The second definition of currency in google is the fact or quality of being generally accepted or in use.

The musical project of Kyiv-born composer, curator, DJ, designer and radio host, Sasha Zakrevska, deploys synthesizers as if layouting a large visual project. Poly Chain’s sound has crept forward since establishing a solo career and first performing after first moving to Poland in 2012, resulting in the psychedelic space nebulae of her debut full-length Music for Candy Shops (Transatlantyk, 2017). Since returning to Ukraine, Poly Chain has issued both her recent bliss-out collaboration with Bartosz Kruczyński, Pulses (Into The Light, 2019), and her second solo album, +/- (BAS, 2019). In turn, Currency – Poly Chain’s first appearance for Mondoj – represents another major step forward for the artist.

I Feel Like a Tourist in My Hometown deploys bassy bleeps in slowly unfurling rhythms, bouncing over distant organ drones until cosmic bliss is unmasked as dread; closing epic Knight of Pentacles extrapolates apocalyptic drama from a handful of repetitive motifs. Throughout Currency, Poly Chain’s love of repetition and the drone mutate into sheer patience and majestic musical architecture. Warm analogue electronics form concentric circles around the listener, tractor beaming us inescapably inwards.

Poly Chain has taken part in various Polish local parties such as Syntetyk, Brutaż, Dype, Trips for Lonely Hearted and Flauta, along with several festivals, including Unsound, Upper, DYM, Sanatorium Dzwięku and more. She’s also composed tracks for theater and museum performances; she spent summer 2018 in co-curating the music program in an illegal art space in Warsaw called U Agatona; today she runs a radio show titled Spaceship Tunes in Ukraine, which represents the style of music she enjoys, but probably never plays in the club.

All tracks recorded and mixed between 2017 and 2019 by Sasha Zakrevska in Warsaw, PL and Kyiv, UA.

MF DOOM is given his flowers, plus appearances from MC Jada Imani and Stanley Ipkuss