Get fresh music recommendations delivered to your inbox every Friday.
We've updated our Terms of Use. You can review the changes here.

A Heart From Your Shadow

by Michael Beharie and Teddy Rankin-Parker 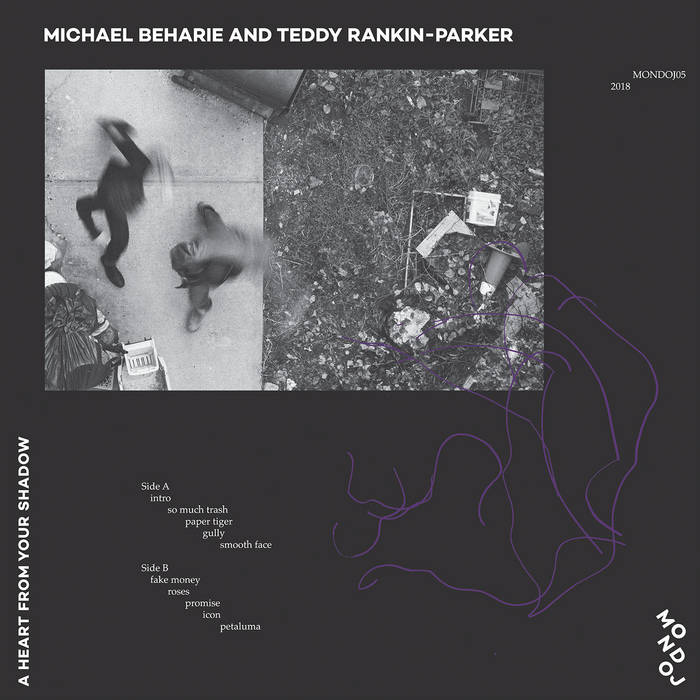 But after a decade of geographic distance, the duo came together to write and record its collaborative debut, A Heart From Your Shadow. Rather than jump into stream-of-concious improvisation, Beharie and Rankin-Parker chose to focus the album's themes via intricately composed pieces. The end result could be described as protest music, brimming with intense energy, harrowing anxiety, and steadfast optimism. All of this finished with a few hired hands: produced by Michael Beharie, mixed carefully by Jim O'Rourke and mastered by James Plotkin.

"Intro" sets the grim scene and issues the album's M.O.. A doom symphony of urban anxiety, the song shows the expansive efforts this duo is able to accomplish. "Gully" offers muted mayhem that's highly synchronized and militantly percussive. It's an anguished two-step of hope and hopelessness. The hyper-repetitive patterns almost hypnotize you into a zoned-out stupor. "Icon" is a psych-freakout of sorts, but the bombast is counter-balanced by intermittent breaks of ambient compositions.

The orchestration chaos and permeated distortion of A Heart From Your Shadow is largely about healing, not fear.

Sampa The Great joins the show to discuss her release, "As Above, So Below".